Warning: array_key_exists() expects parameter 2 to be array, null given in /var/www/wp-content/plugins/af-companion/inc/demo-importer.php on line 78
 We're Back - Witness INSANITY Skip to content

After being locked up for a few years in the state mental ward for “being a danger to myself and others” diagnosed with homicidal hallucinations I was finally released due to the lack of state funds. They deemed me safe enough to be able to mix with “normal” people. Little did they know that I faked it all. They never understood that Hubert was real and that I knew he was out to get me.

I did check in with my social worker who was less than sympathetic and I knew right then and there I was free to move back to my lovely home…Absinthium Asylum. I found it just as I left it. Ancient, dark, damp, dusty….beautiful! I found my hat and coat right where I left it and went down to the morgue where there he was staring at me with his one eye…that eye! Hubert claimed to be overjoyed I was home, but I knew better. He accepted me there because he knew I was the only one with the knowledge to begin again what we started. Hubert is very vain and he needs the spotlight.

So it begins again my friends. We are getting everything back in order starting with our little online home to reach the masses. Soon it will be fleshed out with our past episodes and accomplishments. Then we will add new content including new episodes scheduled to be filmed this spring! It’s been a long time coming my friends indeed, but patience is a virtue and those with that virtue will be rewarded in the end!

Until then my friends remember…DO listen to those voices in your head! 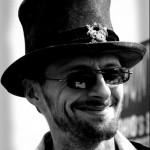 Mr. Maniacal is the horror host of the internet show INSANITY as well as a haunted attraction performer and artist. He is also the co-founder of Blood Brothers Entertainment and the founder of Maniacal Productions.